Batting for Equal Pay and Equal Say in Women’s Cricket 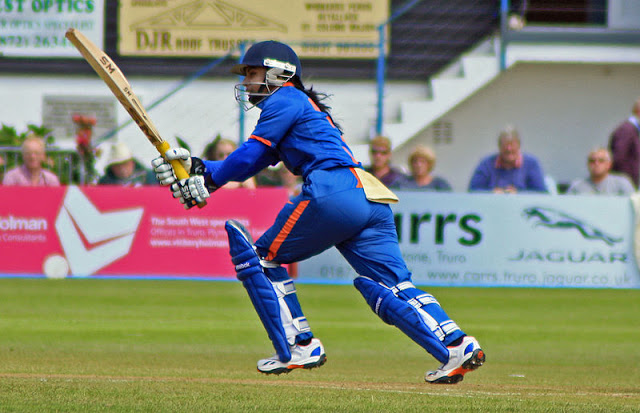 Cricket and Hindi Films (some call it Bollywood) are the nation’s biggest loves. Both of them also very clearly reflect the sexism in our society. I have already spoken about the under-representation of women in our films in my previous post. In the case of cricket, or rather Women’s Cricket, I would like to divide my arguments to focus on 2 issues – the wide discrepancies in ‘Pay’ as in her in earning capabilities in comparison to men in the same industry and ‘Say’ as in the decision-making powers of women.
The Pay Issue
India woke up to the Indian Women’s Cricket Team’s abilities only last year, thanks to a brilliant performance in the ICC Women’s World Cup where they ended up as runners-up. Even though their matches have only recently started to be televised, some of the women cricketers have around a decade worth of experience. And yet when BCCI announced the retainer fees for the contracted women and men cricketers (ironically a day before International Women’s Day) everyone was shocked to see that the lowest paid male cricketer is set to earn double the highest paid female one. That’s a wide chasm. Now one could argue that there are various factors that you could attribute this chasm to:
These are practical factors and are acceptable.
The Say Issue
Mithali Raj in an interview in January this year said that women’s cricket should not be compared to men’s cricket. A case of frustration? In the article there are many statements that make you wonder how much say she and her team really have in the decision-making process! ‘It’s up to the Board’ seems to be something that she has accepted – when it came to training, TV telecast or the need for a women’s league similar to the IPL. She also lamented on the way people perceived women’s cricket.
Virat Kohli however has ‘Say’ and ‘Pay’ covered
It is no secret that Kolhi has the final say – or the ‘veto power’, not only when it comes to getting the best team members but also the coach that he wants a.k.a Ravi Shastri over Anil Kumble. He also had a very important role to play in the pay negotiations. He along with ex-skipper Mahendra Singh Dhoni and coach Ravi Shastri ensured with the recent pay hike for the male cricketers that their earnings match those of their English and Australian counterparts.
It is clear that the Women’s Cricket does not have Equal Say or Pay
Sure, men’s cricket has an established and loyal fan base and that the women’s cricket will take a while to get there. Even the women cricketers must agree with it to some level. But I still believe that we need to get to Equal Say and Equal Pay eventually. After all, other than a slightly smaller size ball and slightly shorter boundaries, women cricket is not played any differently than men’s cricket on the field.
Can somebody from the Men’s team please stand up in support for the Women’s Cricket?
Rahul Dravid or ‘The Wall’ as he was popularly known as, made his country proud with his work ethic and determination. He continues to inspire even after his retirement. Dravid recently took a very important stand fuelling the arguments in favour of ‘Equal Work for Equal Pay’. When the U-19 team that he coached won the World Cup for a record 4th time, the BCCI announced prize money for the team, coach and support staff as follows: 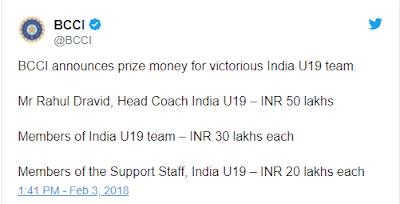 Rahul Dravid immediately protested this. He said that that it embarrassed him to get so much focus and attention when the entire team of coaching support staff put in an equal amount of effort as he did. BCCI had to reverse its decision and award all the members of the coaching staff including the coach Rs. 25 lakhs. Dravid took a prize money cut (I am aware it is not a pay cut) of Rs. 25 lakhs.
We need someone prominent (ideally the men’s cricket captain…after all he is married to a feminist!) to acknowledge the pay gap in women’s cricket as compared to the men’s and suggest ways to diminish the gap over time… say 20 or 30 years.
Equal Pay has to be a goal for Women’s Cricket and if the right steps are taken, it can be done. I have given it some thought.
Here are some ways I think that Women’s Cricket will go from strength to strength:
1) The BCCI needs to invest in women’s cricket today to get returns tomorrow. They need to provide all the infrastructure and support that the men’s cricket gets. It can’t happen overnight but it must in time.
2) The cricket tours must be organized in similar fashion to the Tennis Tournaments, where the women’s and men’s cricketers tour together and compete with their respective opponents from the same country. It will reduce the logistics and sponsorship issues while giving women’s cricket a lot more support. It will also make it double the fun for a spectator. He/she could watch 2 T20 matches – one of the men’s and the other of the women’s team on the same day with lunch in between. What a perfect Sunday!
3) One-off matches consisting of mixed teams comprising of 6 men and 5 women cricketers should be considered. The men and women will learn a lot while playing with one another. If playing in the IPL has taught us anything, then it is that close associations with the best in the world improves your game by leaps and folds.
4) Televise as many matches of women’s cricket as possible and target women viewers. Most men who are true cricket lovers should naturally become loyal fans of women cricket. Unless they are misogynists, the women’s cricket team is just another Indian team to root for! The new women fans will also follow men’s cricket in time. The increase in demand for tickets would lead to increase in prices.
5) BCCI also needs to commit to reducing the pay gap over a period of time-10/20/30 years. They could also lay down criteria based on performance that could claim increase in pay.
Once the foundation is taken care of and women are assured of good pay in the sport if they perform, we will soon have envious bench strength of talented youngsters. With training and guidance, their potential will translate to good match performances and victories. The Women’s ODI team is already doing very well. These changes will help create a team that performs well consistently and across all the formats of the game including T20 where the team is currently struggling for good form.
I cannot end this post without…
Some pointers to the commentators and journalists who add to the gender inequality in Cricket:
1) Get the terminologies right:
No more calling men’s cricket ‘cricket’ and adding the gender prefix only in case of women. Call it men’s cricket from now on. Then calling it women’s cricket is justified. Also let all the players wielding the bat be known as ‘batters’. The gender neutral name will ensure that commentators’ lives become easier. No more stumbling over ‘batsman’ or ‘batswoman’. Oh and along the way, it would be great if someone could acknowledge the sexism in the terms ‘Third Man’ and ‘Maiden Over’ and come up with gender-neutral terms for these as well!
2) Invest time in understanding the nuances of women’s cricket:
This goes particularly to the commentators. Just as you spent time with the international team while also keeping a close eye on the younger crop, please do the same for women’s cricket as well. References to men’s cricket should be avoided as far as possible. Of course, for this to happen, again more women’s matches need to be televised.
3) Giving Women’s Cricket the respect that it deserves:
Journalists also need to stay away from asking the women cricketers to comment on how well Virat and his team are playing. I think such questions just demean the efforts of the women’s team.
Finally let us give a rest to the most important question: Indian men’s or women’s cricket team—which is better?. Through a scientific method such as ‘Elo Ratings’, it has been established that the Indian women’s cricket team with lesser pay and say as compared to the more established men’s cricket was still the better cricket team as on July 2017!
P.S. I love my cricket. I have watched and enjoyed the sport since I have been a kid. I enjoy all formats of the game including even box cricket. The views in this post are based solely on what I watch on TV and what I read about it. I have never played the game and I did not reach out to any women cricketer prior to writing this.
Reading time: 7 min