Toxic Masculinity and its impacts on men and women 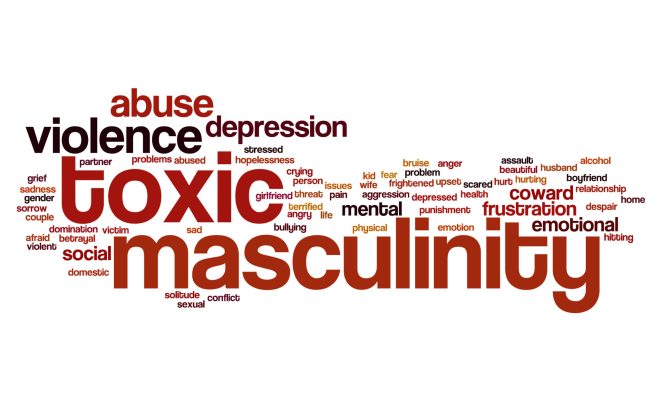 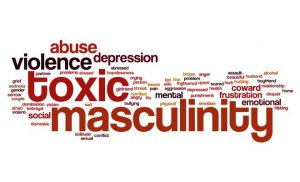 Pic source: www.timeforanawakening.com
What it is not?
The term ‘Toxic masculinity’ was not coined for men-bashing. It is not an implication that masculinity is toxic in itself. Toxic masculinity is a serious issue that must be dealt with. It’s important to note that all men do not succumb to such behaviours.
What it is?
According to Wikipedia: The concept of toxic masculinity is used in psychology and gender studies to refer to certain norms of masculine behavior in North America and Europe that are associated with harm to society and to men themselves.
Associate Professor of Psychology at University of Wisconsin-La Crosse, Dr. Ryan McKelley has his own running definition of the term that explains it well:

“attitudes, beliefs, and behaviors culturally associated with boys/men/masculinity that result in covert and overt bias/prejudice/subjugation/oppression/victimization of self and/or others. This includes the domination of others, misogyny and devaluation of women, homophobia, transphobia, and violence (including homicide and suicide).”

How did it come about?
The birth of ‘toxic masculinity’ arises from gender stereotyping. The patriarchal system that created rigid definitions of femininity also did so for masculinity. Every time a parent (both men and women are guilty of propagating gender norms) tells a young boy to ‘be a man’ or ‘man up’ or ‘don’t be a wuss’, we disturb the natural course of things. “Mard ko dard nahin hota” is not a motivation line, it is an unwavering belief.
What are some examples of toxic masculinity?
According to McKelley, toxic masculinity appears everywhere and can be in the form of common slurs, modern music, at school and outside of school, etc. Such behaviours could be displayed by men consciously or in a sub-conscious manner.
Groups of men engaging in sexual jokes, eve-teasing, trash talk and even gang-rapes are manifestations of this issue.
Popular culture that glorifies the hero bashing up 20 men fearlessly single-handedly makes the matter worse.
What are some of the stereotype myths propagated as truths owing to toxic masculinity? 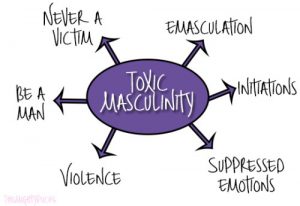 Source: Feminism in India & Image Credit: The Mighty Pucks
Patriarchy has laid some very unrealistic parameters of manhood for all men to follow that have a negative impact on men and women: 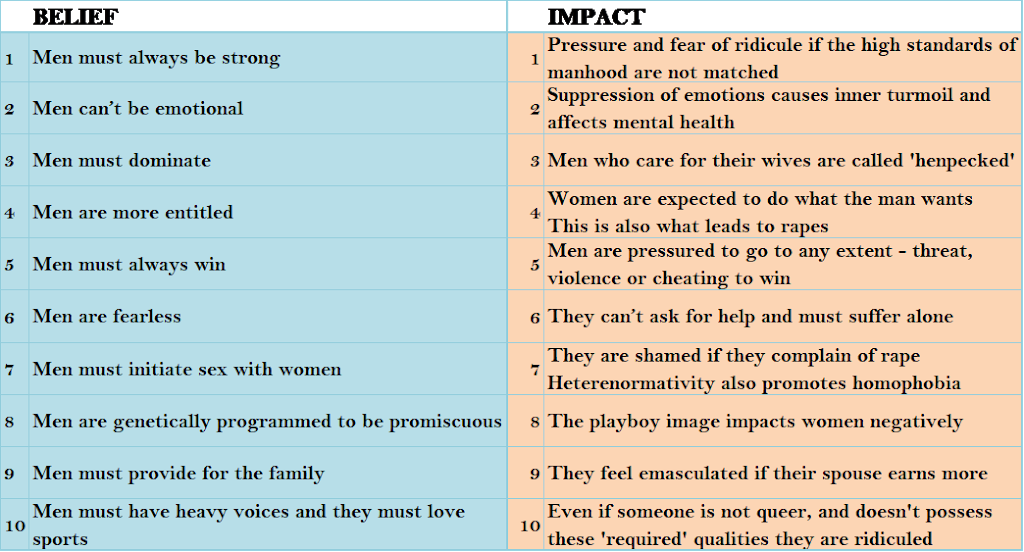 Why do men find it difficult to accept their or their friend’s behavior is toxic?
Imagine having been told all your life to do something and how you’re expected to do it and you get used to it and comfortable. If some things irk you or make you wonder, you put it aside and move on. Old wisdom is the best wisdom. So you don’t question and move on. You don’t check whether the old beliefs hold water in the new context.  A lot of men who say maybe don’t like drinking or aren’t naturally aggressive, find it difficult to confirm to the rigid ideas but relent nevertheless to the peer pressure. When someone then tells you, the way you have been having all this while is not correct, you get confused and angry even.
How does it harm men?
The constant need to match a benchmark is not easy. Not only do unrealistic expectations of ‘machoism’ cause harm to men’s psychology but it also has physical implications. These include high risk of STD’s, cardiovascular health and even suicides. Even though 1 in 59 men are raped, they feel ashamed to talk about it. Since they are always seen as the initiators of sex, if he complains of sexual assault, it is likely that he is asked why he did not enjoy it!
Propagating ‘heteronormativity’ (the belief that people fall into distinct and complementary genders (male and female) with natural roles in life. It assumes that heterosexuality is the only sexual orientation or the only norm, and that sexual and marital relations are most (or only) fitting between people of opposite sex.), causes hatred and intolerance against the LGBTQ+ community.
How is it linked to Misogyny?
Misogyny is the dislike of, contempt for, or ingrained prejudice against women. Toxic masculinity if unchecked leads to misogyny. The years of being told that men are superior to women, leads them to feel powerful. Attempts made by women to break this hierarchy is usually met with aggression and translates to sexual contempt. This leads to issues of sexual assaults, rapes and sexual trafficking.
Why is it important to discuss it from the perspective of Feminism?
Patriarchy has led to toxic masculinity which in turn has led to subjugation of women. Unless you go back to the root cause of the problem, changes cannot be made.
Since Feminism speaks of equal rights and opportunities to all, we need men to have the right to be themselves as well. The pressures of societal conditioning have a negative impact on them as well.
How do we tackle the issue of ‘toxic masculinity’ as a society?
By restoring the balance. Neither men nor women should have unrealistic expectations placed on them. Both men and women need to help one another in our journeys together. No more saying ‘boys don’t cry’. Support is the key. The terms ‘femininity’ and ‘masculinity’ must arrive at a normal definition and not extreme ones. That’s when real change will take place.
I will leave your with this very touching first person narrative of Jordan Stephens, a writer/performer best known as one half of British duo Rizzle Kicks. He says he had abused his power in the past but now wishes to lead a more positive life. Here is an extract from the article:

As far as I can see, this toxic notion of masculinity is being championed by men who are so terrified of confronting any trauma experienced as children that they choose to project that torture on to the lives of others rather than themselves.

What’s even more upsetting is that often when men allow themselves to feel this pain, it’s so new to them that they kill themselves. We live in a society where men feel safer killing themselves than acknowledging pain. Accepting the patriarchy from a place of false benefit will prevent you from ever truly loving yourself or understanding others. It’s OK to feel sad. It’s OK to cry. It’s OK to have loved your mum and dad growing up. It’s OK to have missed them or wanted more affection. It’s OK to take a moment when you’re reminded of these truths. When you allow your brain to access these emotions, it knows exactly what to do. So nurture yourself. Talk honestly to the people around you, and welcome the notion of understanding them more than you have ever done before.