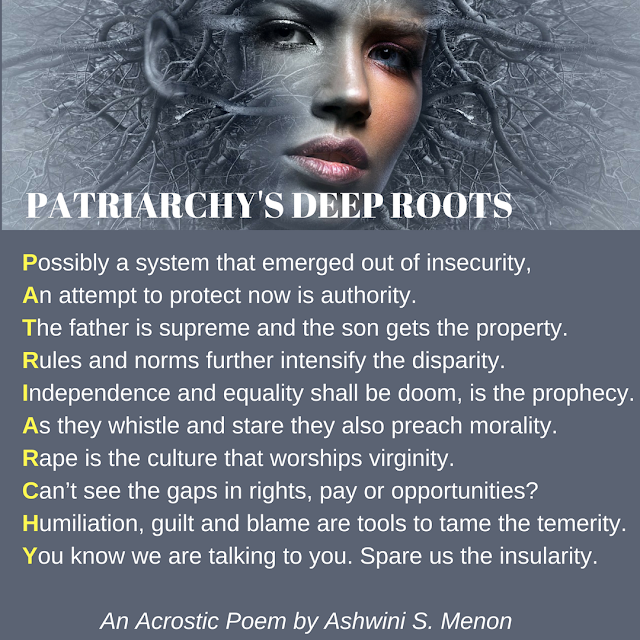 Possibly a system that emerged out of insecurity,
An attempt to protect now is authority.
The father is supreme and the son gets the property.
Rules and norms further intensify the disparity.
Independence and equality shall be doom, is the prophecy.
As they whistle and stare they also preach morality.
Rape is the culture that worships virginity.
Can’t see the gaps in rights, pay or opportunities?
Humiliation, guilt and blame are tools to tame the temerity.
You know we are talking to you. Spare us the insularity.

*The above poem has been written in the Acrostic style of poetry where the first letters of each line spell out the word.
Patriarchy is an invisible monster and as a society we need to put an end to the power struggles it propagates. When we trust and believe in one another, we will all be able to grow. It’s not idealism, it’s practicality. More women in the workforce will only lead to more prosperity.
As per this year’s Economic Survey, we have made significant improvements in gender inequality in a lot of aspects. But on close inspection, we still have a deep-rooted gender bias against women. This is reflective in our “meta preference” for sons. Parents have children until they have a desired number of sons – taking the number of “unwanted” girls to 2.1 crores according to this year’s Economic Survey. Mind you, before you begin to think that this happens only in impoverished rural families, the Survey pointed that it prevails also in middle and upper-middle class families as well.
Sex determination is an offense. No problem! We still have a way to circumvent it…keep having kids till we have a son!
Our workplace statistics are startling:
a. The labour force participation rate for women is falling: from 37% in 2004-05 to 28% in 2016.
b. The Pipeline for Women Starts Small and Continues to Shrink

c. Women earn 57% of what their male colleagues earn for performing the same work with the gender pay gap widening with her education and advancement in her career.
d. Read more about the pay gap issue in Women’s Cricket here.
I have already spoken about the representation of women or lack thereof in our films and the Indian legal system.
Whether a woman has the right to go out or the right to raise her voice against assault or name her assaulter or change her name, it is not a decision for the system to make – it is hers and hers alone. We need to abort the growing sexism.
My fight against the system of Patriarchy, makes me an Incorrigible Feminist. When will you become one?

Follow Ashwini's Perceptions on WordPress.com
#AtoZ #BlogChatterA2Z Challenge #Feminism #sexism Patriarchy
« Previous post
Are the 2 ‘Queens’ of our Entertainment Industry Feminist Icons?
Next post »
One for all and all for one: Feminists & the Queer (Poem)