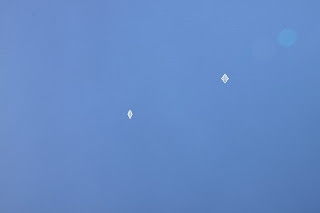 It was a Sunday. I was irritable. I felt like doing nothing. I picked up a book and began reading it on my bed. Engaged for a while, I got bored soon. I glanced up and saw a window-full of pleasant clear blue sky. Oh what was that? Was it a bird? A small tuft of runaway cloud? Gosh! An unstable flying object perhaps?? Intrigued, I kept my book aside and moved towards the window sill. Oh a white kite flying high in the sky! It was so far in the distance, it appeared like a small white dot. Wobbly at first, it steadied itself as it rose. With its tail invisible, it created a lone white ripple on the cloudless sky. Suddenly there was another one that caught my attention. Also white. Rising swiftly as though to beat the other kite in a race. The kites sometimes floated close to one another. Sometimes they were far apart. There were moments when they flew one above another. I was gleefully following the trajectory of the kites through the window pane. At one point in time, the kites alligned themselves next to one another. I was amazed to see the two speckles situate themselves at the centre of a stain that had assumed a flattish U shape on the window. I smiled back at the beaming formation.

I looked around waiting for more action in the blue. Sure enough I saw a third kite (appeared to be white again!) join its compatriots. While they hovered, I noticed them come together and form the three points of a long dancing hat. This was so entertaining! The kites continued to sway around unaware of my now undivided attention. As though listening to my thoughts, they reversed their positions to create an upside down triangle and I pictured a long sad face of a dog.

After a while, a fourth kite (I know the odds are high of this one also being white – but it was I swear!) rose from the west. It was lovely to see the four kites playing merrily in the sky. They slowly lined up one after another and I was thrilled to see the four finger-holes of a small flute being formed. The four white specks were floating perhaps to the beat of the music emanating from the flute.

The kites had been happily twirling about for almost 10 minutes now. Watching them have so much fun had lifted my spirits. At the exact moment of the afore-mentioned realization, it all literally went downhill! All four kites tumbled one after another in a downward spiral; like the last drops of a fountain. Poof! They disappeared! Did the wind play spoil-sport or did they cut each other’s threads? The latter seemed more plausible. The spectacular ‘telepathic’ show was over. Vast expanses of blue was all that I could see from the window. I waited, for the white spots to re-appear and prance about. I wished to see the grinning face again. And while I waited I wondered- why can’t all kites, of all colours, stay afloat always? Why try and tug competitively at each other’s only tether? Sigh! After all there is enough sky!